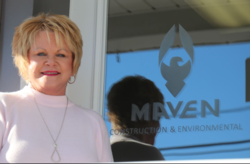 This article was originally published on the U.S. Small Business Administration website. The original article can be founda here: https://www.sba.gov/offices/district/in/indianapolis/success-stories/rural-indiana-company-works-hard-earn-hire-vets-gold

Maven Construction and Environmental set up shop in Odon, Indiana in 2008 with four former federal contracting officers who wanted work "close to home."  With the Naval Surface Warfare Center Crane right in their back yard, they knew there would be plenty of work providing general construction services to the many federal projects taking place on the base.

Kathy Parsons came on board as CEO in 2010.  By 2015 Maven became certified as a Woman Owned Small Business (WOSB) and then applied and was accepted into the 8(a) Small Business Development Program, an SBA contracting program which helps “level the playing field” for socially and economically disadvantaged small businesses vying for federal contracts.  "Jumping into the 8(a) Program was natural for our business," Parsons says.  "It's a leg up on what we were already doing--going out, marketing ourselves, and winning new government contracts."

Labor, however, is an issue.  Parsons says, "We're always looking for workers who are teachable and willing to cross train.  We provide in-house training and pay for any certifications, such as asbestos removal or haz-mat."  Maven also offers a highly competitive compensation package including retirement which Parsons says "most trade workers can't get anywhere else.

Parsons says her HR team worked hard creating a benefits package and incentives to entice workers.  But, Parsons laments, "we're not finding people in their 20s - 30s wanting to go to trade school.  Computers have changed everything," she says.  "Not that many people want to dig in and get in the trenches, which is what we need in our jobs."

Parsons does say that Maven does find some success in one sector--military veterans.  "Working primarily on military bases, we're a mission minded company," Parsons says.  "Veterans have learned to be teachable and we speak their language."  So when Parsons HR manager came to her saying they met the criteria for the Department of Labor HIRE Vets Gold Medallion, she was excited--and very proud of her company.

In May, 2017, President Trump signed the HIRE Vets Act which required the Department of Labor to establish a program recognizing employers who successfully recruit, employ, and retain veterans as employees.  In 2018, Maven earned the Gold Medallion Award for Small Business, one of only five Indiana employers to receive the award.

"We're proud of Maven's efforts to hire veterans, Parsons says, "and will continue to target veterans in our employment recruitment."